Luz y Norte, literally translatable as “Light and North”, identifies the Spanish composer Lucas Ruiz de Ribayaz’s collection of music published in Madrid in 1677 and kept by the National Library of Madrid: “Light and North music to walk through the tablatures of the Spanish guitar and harp, to strum and sing accompanied by the organ, and brief explanation of the art, with easy precepts, undoubted and explained with clear rules by theory and practice”
Luz y Norte is a young Spanish ensemble born out of the interest of all its members in spreading the European and Latin American vocal and instrumental repertoire of the Renaissance and Early Baroque.

Essentially it comprises voice (tenor), viola da gamba or baroque cello and Spanish double harp, but its formation is variable according to the requirements of the programs. All its members have extensive training and experience both as soloist and with prestigious early music groups, which guarantees a high-end performance level.

In 2017, Luz y Norte published its first album with the international Brilliant label: Vea yo los ojos y muera (Music from the time of Cervantes), with music by Spanish composers Sebastián Durón, Juan Bonet de Paredes, José Marín and Juan del Vado y Gómez, all influenced during his life by the poetics of Miguel de Cervantes. 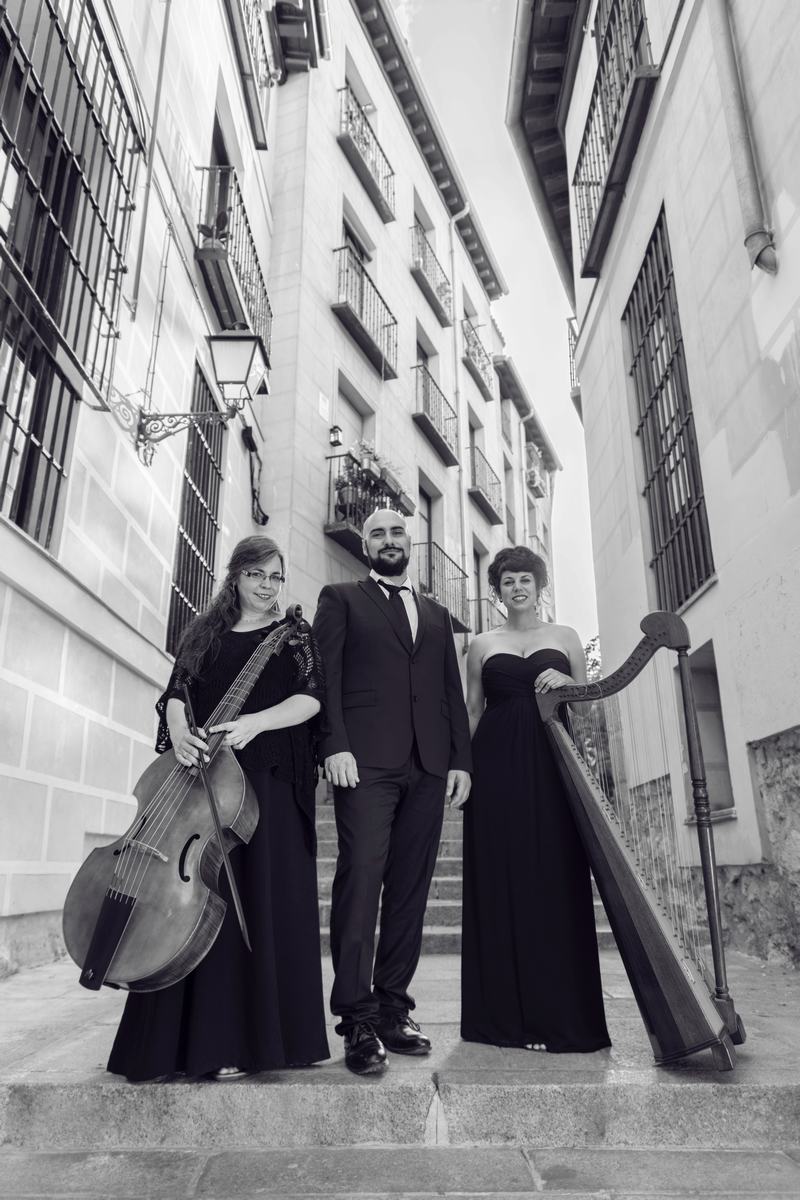 She was born in Havana (1976), where she studied cello at the “Amadeo Roldán” Conservatory, graduating in 1995. During her undergraduate studies, she received several awards in important national competitions, such as Amadeo Roldán or the García Caturla. In 1995, she became member of the National Symphony Orchestra of Cuba and the Symphony Orchestra of the Gran Teatro de La Habana. She has worked with conductors such as Leo Brower (Cuba), Bernardo Adam Ferrero and Gorka Sierra (Spain), Jean Paul Penin (France), Yoshijaro Fukumura (Japan), among others.

Between 1994 and 1998, she participated actively in the International Festivals of Contemporary Music celebrated in Havana annually, forming part of the chamber music group “Anima Ensemble”. Among her concerts as cello soloist highlights excels the one shared with the Cuban pianist Chucho Valdés, organized by the Cuban Institute of Music, in honor of the latter and the composer Calixto Alvarez.

She began studying viola da gamba in 1999, and in that same year she joined the Ars Longa Ancient Music Ensemble in Havana, where she worked under the conducting of Joseph Cabrè (Spain), Gabriel Garrido (Argentina) and Shalev Ad-el (Israel). With them she made numerous international tours in France, Spain, Italy, Mexico, Colombia, and other countries. In addition, she participated in numerous recordings with this ensemble for the French label K.617.

In 2002 she moved to Spain, studying viola da gamba with Ventura Rico at the “Manuel Castillo” Conservatory in Seville, obtaining honors in all courses. She has also taken classes with important gambistas and cellists like Jordi Savall, Wieland Kuijken, Vittorio Ghielmi, Itziar Atutxa, Mercedes Ruiz and Fahmi Alqhai.

As a soloist, she also performs with ensembles such as the Baroque Orchestra of Jerez, Il Parlamento, Qvinta Pars, Artilugium, Ceuta Chamber Orchestra, Folengo and Ensemble Buenayre, and with soloists and conductors such as Juan Carlos de Mulder, Gerard Talbot or Lambert Climent. In 2006, she worked on the successful production of the opera “Dido and Aeneas” under the direction of maestro Andrés Cea. In 2008, she starred in a series of concerts based on the “Suite for viola da gamba and orchestra” by Telemann performed with different Andalusian orchestras in Seville, Granada, Cordoba and Aracena, receiving great reviews. In 2009, she participated as a soloist with the Youth Orchestra of Andalusia (OJA) at the premiere at the Real Maestranza in Seville of the suite “The Journey to Simorgh” by Jose Mª Sánchez-Verdú, conducted by maestro Arturo Tamayo.

In the summer of 2011 she was responsible for the viola da gamba course at the XVIII “Castillo de Aracena” Ancient Music Exhibition, where she performed the complete viola da gamba sonatas by J.S. Bach.

She is also very active working with the ensembles Il Parnasso dell’Armonia – with repertoire centered on the European Renaissance and Baroque – and Musica Liberata – a group specialized in the interpretation of the Latin American Baroque – of which she is the founder and director.

She began her studies at the “Arturo Soria” Conservatory in Madrid. In 2005 she joined the Superior Conservatory of Music in Zaragoza (CSMA) and at the same time began her professional career as a stage musician at the National Classical Theater Company (CNTC), with which she participated in the following productions: Journey to Parnassus by Miguel de Cervantes, Don Gil of the Green Breeches by Tirso de Molina, The White Hands do not Offend by Calderón de la Barca, The Condemned by suspicious, attributed to Tirso de Molina and The Dog in the Manger by Lope de Vega . Her role in these productions was to rescue the extensive repertoire of human tones and instrumental music that was part of the theatrical landscape of the Spanish Golden Century (palatial theater and corral of comedies). With CNTC she toured extensively Spain (Seville, Barcelona, Toledo, Valencia, Bilbao, Coruña, Logroño …) and abroad (Lisbon, Buenos Aires, Montevideo …). This led her to investigate more deeply about the music in the theater, developing her final project on the importance of the harp in the theatrical context of the XVI and XVII centuries in Spain.

Un Viaje a Nápoles (A Trip to Naples) is her first solo album for historical harps, with the collaboration of LUZ y NORTE. Her second album El Teatro del Arpa (The Harp’s Theatre) was released in March 2017.